Agricultural applications of fertilizers and pesticides have increased dramatically since the middle 1960s and the impact of agrochemicals on water quality has become a serious environmental concern. Nitrate is a particular concern (1) because of the potential adverse impacts on both public health and ecosystem function, (2) because of the high mobility of nitrate in surface and groundwater, and (3) because of the widespread use of nitrogen in modern agriculture. Annual application of fertilizer-N in the U.S. has grown from a negligible amount prior to World War II to approximately ten million metric tons of N per year. 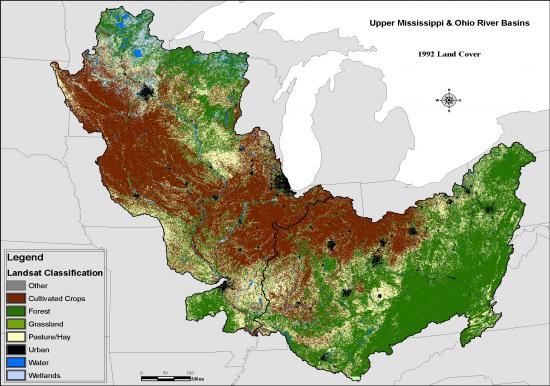 Agricultural nutrient losses to streams are a special concern in the U.S. Corn Belt. This region is characterized by intensive row-crop agriculture (upper figure) and by correspondingly intensive use of commercial fertilizer. Corn and soybeans are the two largest acreage crops in the region and account for the vast majority of fertilizer use. Since 1950, total acreage of these two crops has increased by about 50%, primarily due to increases in soybean acreage. Over this same period, commercial fertilizer use has increased dramatically to approximately 10 million metric tons per year.

Agricultural nutrient loads to Corn Belt streams are among the highest in the country and are reflected by significantly elevated stream nutrient concentrations (lower figure). Nitrate nitrogen concentrations in agricultural streams frequently exceed the drinking water standard of 10 mg N L-1, and concentrations in tile drainage water are commonly more than double the drinking water standard. In addition to impacts on water quality within the region, agricultural nutrient loads to Corn Belt streams are considered a primary source of nutrients contributing to hypoxia in the Gulf of Mexico.